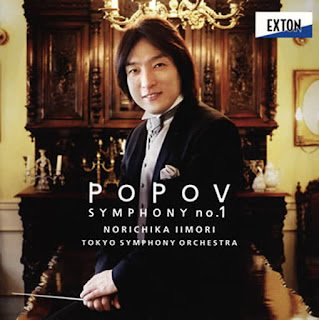 Gavriil Popov's Symphony No. 1 -- immediately banned after one performance in 1935 -- is one of his best works. It also apparently helped inspire my favorite Shostakovich symphony, the Fourth.

I've enjoyed all of the recordings of Popov's symphony that I've been able to find, but my favorite is conductor Norichika Iimori's recording with the Tokyo Symphony.

Update: I listened to this last night, and my opinion is confirmed. The first movement is amazingly noisy and violent, the second movement Largo is melodic and beautiful (until it gets the thunder going again.) I wish Popov could somehow hear this recording.

- September 05, 2022 2 comments:
Email ThisBlogThis!Share to TwitterShare to FacebookShare to Pinterest 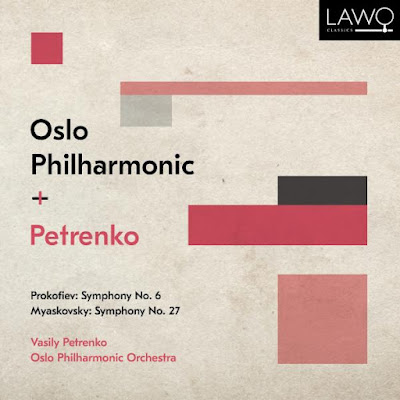 Vasily Petrenko, not to be confused with Kirill Petrenko (who is currently recovering from a broken toe)  has taken on the praiseworthy task of trying to ensure that Nikolai Myaskovsky is not forgotten. Myaskovsky wrote 27 symphonies and apparently was considered a major composer in his day but doesn't get a lot of attention now.

This is not the Myaskovsky of his early days, when he was a leader of the Association for Contemporary Music, and a leader in the kind of "Russian Futurist" music this blog is concerned with, but I'm pleased to see Myaskovsky get some attention. I don't know whether the series will continue, but I'd like to hear what Petrenko does with Prokofiev's third symphony and whatever Myaskovsky he'd choose to pair it with. 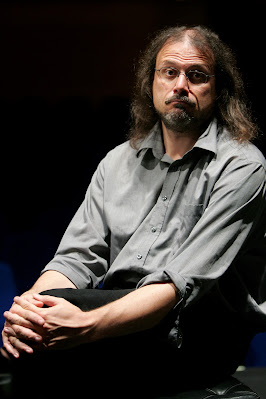 Steffen Schleiermacher, a German pianist, composer and conductor, has contributed to the revival of Russian Futurist music with three albums. 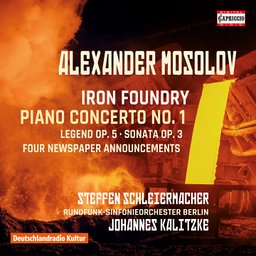 On those albums, he seemed to me to have a particular affinity for Mosolov, and in fact he is the featured pianist on a Mosolov collection with various artists issued by Capriccio which includes Mosolov's first piano concerto.

I should also point out that Herr Schleiermacher is a very prolific and hard working musician who has recorded a great deal of contemporary classical music by composers from all over the world, including the complete piano music of John Cage and the works of a very wide range of other composers, everyone from Morton Feldman to Stefan Wolpe, even avant-garde music from Indonesia! Explore his work at the official website.  It has hard to think of another musician who has made a greater effort to connect listeners to modern classical music.

As far as I can tell, he isn't on social media, but he deserves to be better known. 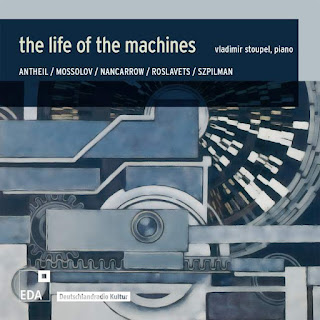 The Life of the Machines, a piano recital recorded by Russian born French pianist Vladimir Stoupel, is an interesting album I recently stumbled across on Freegal Music, the streaming music service offered by some public libraries in the U.S.

There are good performances of two substantial pieces by composers this blog is concerned about: The second piano sonata of Nikolai Roslavets, and the fourth piano sonata of Alexander Mosolov.

The other pieces -- by Conlon Nancarrow, Wladyslaw Szpilman and George Antheil -- put the two Russian pieces an an international context of Futurism. All are interesting; I particularly liked Antheil's fourth piano sonata, which convinces me I need to listen to Antheil more often. 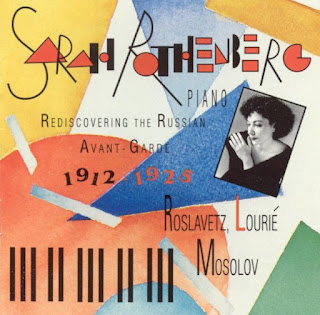 Perhaps the first "Russian Futurist" piano album, Sarah Rothenberg's 1992 album Rediscovering the Russian Avant-Garde (1912-1925) remains important both as an excellent recording and as a pathbreaking work which led the way for many other recordings.

Rothenberg is a fine piano player, and her recordings of Mosolov's fourth and fifth piano sonatas persists as some of the best renditions of those two works. Whenever I listen to this album, I also particularly enjoy her performance of Nikolai Roslavetz' "Prelude." Alex Ross called it a "superb recital" in the New York Times back in 1994, and I have absolutely agree.

The review of the album at Allmusic, written by Uncle Dave Lewis, points out the importance of the recording in helping to revive interest in almost forgotten composers: "Featuring pianist Sarah Rothenberg, this collection practically introduced the subgenre of Russian futurist music to the market; even the first Russian recordings of composers such as Roslavets and Mosolov on Le Chant du Monde did not appear until a couple of years later."

The album is available at the Freegal public library music streaming service.

This album and an excellent Yuri Favorin recording covers a lot of the Russian piano music from early in the 20th century that you might want to know. 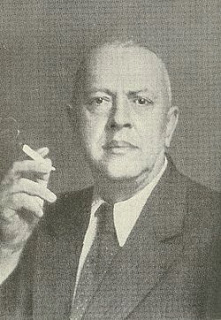 Alexander Mosolov, who continued composing even after being sent to a concentration camp.

The late Richard Taruskin has been getting dinged a bit for being hard on Prokofiev (for Prokofiev's supposed excessive deference to the Soviet regime.)

And in fact it's become kind of a cliche to beat up on Prokofiev and Shostakovich for not publicly standing up to Stalin, or whatever they were supposed to do to show their independence. Many of these criticisms come from folks who are safety inside the United States, or some other place where freedom of speech exists.

I can't help but point out that many American academics are discovering that it's easier to be brave in theory than in actual fact. Here is a comment posted recently on Bari Weiss' Substack on an article about the "Woke" atmosphere at American college campuses:

"I am one of the 99% who doesn't speak up publicly or professionally. I talk about it with friends and family, specifically the 'woke' ones, but I won't, for example, share an article like this on Facebook or speak up when a colleague casually mentions the prevalence of white supremacy in America. I work in an entirely different field but one only marginally less woke than higher education. I'm 34 and my career is just starting to have something resembling momentum. I think the ongoing revolution at American universities is the single most important threat to our country, including China, but I'm not going to be another white male easily dismissed for wrong think. I just can't do it." (Source). Others in the comments report similar situations.

Of course, being worried about being dismissed (if that's really a possibility, it's difficult to judge without more facts) is pretty serious.

Still, it's not the same thing as being tortured and shot, the fate of Vsevolod Meyerhold. (At the time, Meyerhold was working on Prokofiev's opera Semyon Kotko.) It's not the same as being shipped off to the Gulag, the fate of Alexander Mosolov. It's not the same as expecting to be arrested during the times of Stalinist repression, something Shostakovich had to endure. Prokofiev's wife was sent to a concentration camp. Of course, lots and lots of other examples can be cited, such as Shostakovich reading a Pravda editorial that threatened him.

Maybe it's not so easy being a target, particularly when you face a fate more serious than being criticized on Twitter. And maybe it's time to be a bit more sympathetic to Shostakovich and Prokofiev. 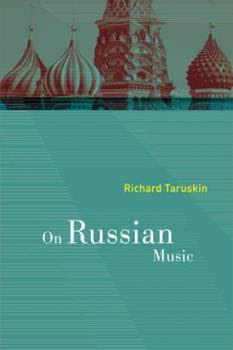 Prominent musicologist and author Richard Taruskin has died.  The New York Times obituary (I take the Times, so I can get you behind the paywall) notes his prominence in writing about Russian music and discusses some of the controversies he took sides in:

"His words were anything but sterile: Mr. Taruskin courted controversy in nearly everything he wrote. In the late 1980s, he helped ignite the so-called 'Shostakovich Wars' by critiquing the veracity of Testimony: The Memoirs of Dmitri Shostakovich, as related to and edited by Solomon Volkov (1979), which portrayed the composer as a secret dissident. (Mr. Volkov is a journalist, historian and musicologist.) Drawing on a careful debunking by the scholar Laurel Fay, Mr. Taruskin called the book’s positive reception 'the greatest critical scandal I have ever witnessed'.”

Gavriil Popov's Symphony No. 1 -- immediately banned after one performance in 1935 -- is one of his best works. It also apparently helpe...